I recently (finally) returned to the stage after a 5-year hiatus. This hiatus was caused by a variety of factors–mostly surrounding a bad relationship in undergrad and pressure to find a more “lucrative” career path than acting. For five years, I continually psyched myself out of auditioning for anything…big or small. I thought writing, quietly, was enough. I didn’t even realize how much pain I was carrying until I blew up at a loved one when they suggested that they give up their art. I couldn’t stand the thought of anyone putting themselves in my position.

And then my mentor (shown at the far right in the picture below) challenged me to get up onstage again. I took her up on that challenge. It was time. This past Sunday I attended an open mic and performed spoken word poetry for the first time. While it was only a five-minute performance, walking onto that stage and stepping in front of that mic was like coming home.

I happened to be called up as the final act of the night, closing out a number of other talented artists. I received applause and praise afterwards by friends and strangers alike. It was like a dream. 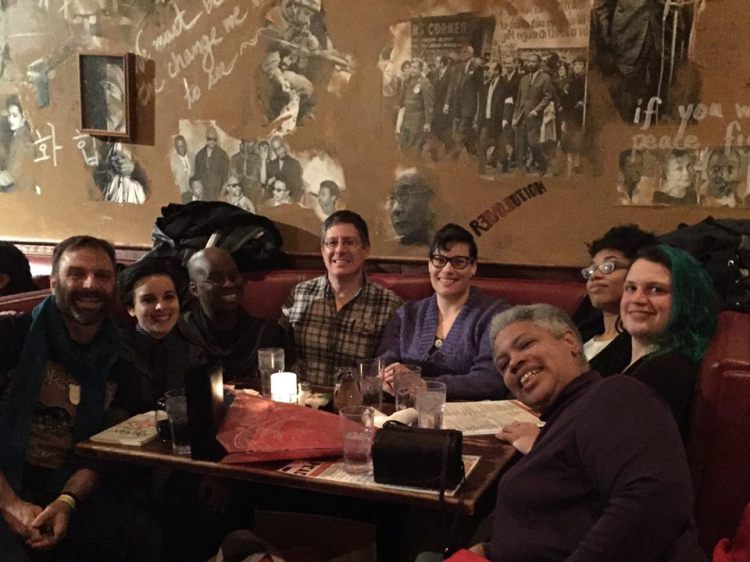 (Support network–I’m the second from the left)

I’m bummed I didn’t ask anyone to record the performance, but I think I’ll have another chance for another night. Here are the pieces I performed:

My Marriage to Silence (Five Years)
How can you describe
A five year marriage to silence?
It is a lot like this, actually
Except I am not here
I am there
Quiet, passive, just observing
With a tongue caught
On gates of my own making
Silence against my shoulder
Breathing along my spine
That this stage is not mine
That I am mistaking this mic
As something that I deserve
Silence slid a ring around my finger
A ring around my neck
Silence told me that a happy marriage requires active listening
Silence told me that these reams of tears and words don’t require an audience
Silence told me I have nothing worth saying anyway
Five years.
Silence? Happy anniversary.
I want a fucking divorce.

Deer Paths
His shoulders bear the mark of my palms
My fingers pull lines down her spine
Flesh calling to flesh, only echoes
Dreams, Jungian jungles of perception and need
The hidden sanctum of unrestrained desire
Their mouths drawing roads of love up my thighs
There are deer paths in the park on the Mall
Certain places where the grass is worn away to sand
Strange creatures, these deer
They build monuments to gods and men
Seeking separation from their hooves and horns
But I see the imprint of the wild
The whispers of animals trampling uniform lines in the dirt
I see the paths shared, crossing and merging
into the sweat and hair of our skin
We forget what we are
And what we desire
That his shoulders and her spine
Are the landscapes of my wandering
And they remain on my thighs
The earth does not forget
Our bodies to not forget
We, deer, our movements traceable
On skin and land
In dreams and grass